He was and still is a legend. Obviously people here in L.A. love him but when he comes to Portland or you see him on TV, the fans go crazy when he gets introduced. Seventeen All-Stars, an NBA MVP, five championships, the guy is an absolute legend. He definitely left a huge imprint on the game. An assassin on the offensive end but I think he won eight or nine first-team All-Defense, so the guy can play. He’s at the top of almost everything in Lakers history, the list goes on and on, a lot of accolades. 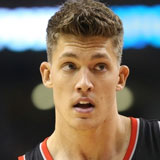