I do feel -- and I've said this before the last couple of years with LeBron, when he became the best player in our game -- that Kobe Bryant is the greatest player of our era. The Kobe Bryants aren't around no more. There are good young players, but there will never be another Kobe. So every opportunity you get to face him, you want to seize that moment.

You hear about the guy being down, struggling with his shot and going through all of those other things. But what I'll always see is the guy who has dominated this game at his position for a long time, who performed at a high level for 20 years.

I mean, I broke the guy's nose in the All-Star Game, for goodness sakes, and we're still cordial. He respects competitiveness. He knows I did it, but I wasn't trying to. He's a competitor. I'm competitive. We have that in common.

No matter what he's done, no matter how many championships he's won, he's still the most competitive guy in the gym. It's something I want to emulate. No matter how many great young talents come in, you still want to be respected. It's not easy to go through it, to be as great as he is and be picked apart. You go through so many evolutions in your game, but you're still here, no matter what. 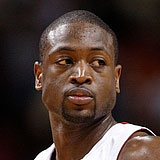 Dwyane Wade
Kobe banks in the 3 for the win vs. the Heat