I just told him basically he’s a guy I’ve watched since I was a kid, he’s a guy I’ve looked up to and kind of modeled my work ethic after. He’s a guy who’s relentless with his approach and work ethic and I told him I just appreciated what he’s done for the game and that he’s inspired me. He might not even know it but he’s inspired me in terms of how I approach the game and him going through all that adversity. I got a lot in there in that short 20 seconds, just explained to him that I appreciate what he’s done for the game. 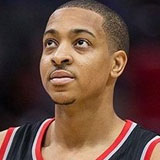