He grew up so close to us, and it was just like, I could do that. I could do that. Let me work on it. He gave so many people hope to work hard in whatever they did. And I was one of those kids that really, really took that in to doing the extra things -- the things that were necessary, the things that you thought were unnecessary. I was just a kid that felt I needed to do those things in order to get over the hump and be successful. He inspired me like no one before -- besides my mom and brother. He’s up there.

It was great just to be in his presence, to hear from him, and for him to tell me that he’s watching, he’s noticing, and telling me to keep working hard -- it means the world to me. It gives you a sense of hope, like you can be something special, and that’s all I’m trying to be is something special.

I don’t want to say I was a part of it, but to be in the NBA when this is happening -- it’s like, I was a part of history. I can tell my kids, Hey, it was my first year in the NBA and he retired that year. So I got a little story to tell, to be a part of it. It’s a huge thing, and I respect him.

I’m definitely gonna show my respects before the game and after. I got to pay my dues. But when we’re out there on the court, I’ve got to play him hard -- just put it in his mind that his last time playing against a Chester guy, it was a great matchup. I definitely look forward to that. It’s an amazing feeling to be a part of that. 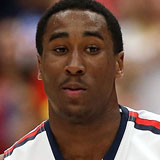