A legend… I grew up watching him. He was my ‘MJ.’ Just for him to be done, for his last go-round, it’s sad. That’s the end of a dynasty. He had a really good run, but it comes to an end. He’s a monster. He’s a beast.

He’s a warrior, man. He’s a competitor. I don’t think there will ever be another guy like him. The way he did it, he willed his teammates to victories, championships, things like that. It was a great story. 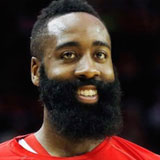