Mamba Out is a tribute to Kobe Bryant, the greatest player of my generation. In honor of Kobe retiring, I wanted to make a website showcasing the impact that Kobe has had in the league. From the current superstars like LeBron and Durant, to the up and coming players like CJ McCollum and Damian Lillard, they were all inspired to some degree by the Black Mamba. If you're a Laker or basketball fan, feel free to share the site and also let me know if I missed some other quotes. You can email me at jadlimcaco+kobe@gmail.com. 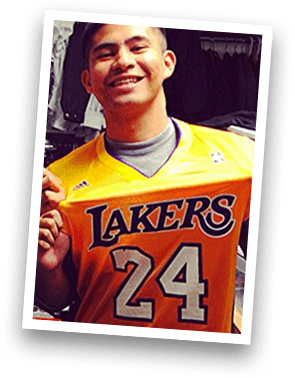 My name is Jad Limcaco and I'm a fan.

I was extremely sad when I read your poem on the Sports Tribune. I guess you're finally ready to hang it up. I know it's time, but it just won't be the same watching the Lakers without you. I've been following you since I was 8 years old. 20 years later, I'm out of college, married, and have a career. Growing up, I could remember begging my parents to buy me your latest Adidas shoes. When I was playing ball in high school, I would try to emulate all of your moves. I even used to practice designing in Adobe Photoshop by creating desktop wallpapers of you (see below.)

A couple of weeks ago, I had a feeling that this would be your last season so I wanted to watch you play one last time. I found some great seats to watch the Lakers play the Warriors at Oracle.

Although you had one of the worst shooting nights of your career, I still cheered. I cheered everytime you touched the ball. I was around other fans who kept yelling at you. They called you old. They told you to keep bricking. But none of that matters. They can't take away all that you've accomplished. You'll go down as one of the greatest players in history and I'm just glad that I was able to watch you play.

As your career comes to a close, I wanted to say thank you.

I will probably never get to meet you in person and shake your hand, but this website is my small way of saying thanks. Thanks for the many great memories, Kobe.

Thank you for 5 championships.

Thank you for the NBA record, 12 threes.

Thank you for the entertaining All-Star games.

Thank you for the Olympic gold medals.

Thank you for the many clutch shots and game winners.

Thank you for being the closest thing to MJ.

Thank you for silencing the haters.

Thank you for being an inspiration to this Laker fan.

Thank you for helping me develop a love for THE game.

You will be missed.